We woke up very early that day; it was still very dark outside and the clock on Mirko’s iPod was showing 4am.

Mirko put down the tent and I made breakfast. It was a beautiful day. The desert was waking up and the colors were dancing on the sky.

We were so happy. We had a short, but very good sleep and we knew that we were not far from chaikhana, which was now only 15km from where we were sleeping.

As the sun started rising up from the horizon we were on the road, riding into the sunrise.

I was riding behind Mirko as I always do, when he suddenly stopped .

It was strange the way how he stopped and when I came close enough, I saw that the trailer was on the floor. “Its BROKEN” said Mirko.

I didn’t know what to think; we were only 5km from chiakhana, but still out there stuck in the desert with hot sun above us, a small shade from the trailer which was slowly disappearing and hardly any traffic. If we needed help we would be waiting there for long time.

The arm which connects the trailer to the bike was broken. In Israel the guy who was working on our trailer warned us it might broke, so he supported the aluminum arm with the metal part he put inside to make it stronger. And now the arm was broken.

We applied some paste to the broken part and waited for 40min to dry. It should be like steel but it only worked for another km and then it broke again.

We didn’t have many options. Mirko took his bike and went to the chaikhana for help. I stayed with my bike and the broken trailer hiding in the shade of the trailer which was getting smaller by every passing minute and hoping that soon some empty truck will pass and give me a lift to chaikhana.

There were no cars going in our directions. It was getting hot and more than an hour passed before I saw the first truck. I was praying that it was empty so I could get a lift down the road. Most of the trucks are full and they can’t take you.

But I was lucky, the truck was empty and a nice driver gave me a lift to chaikhana , where he was going to eat his lunch. On the way we met Mirko driving in a small car coming for me, so the driver waved him to turn around and go back.

When we arrived, we asked him if he could take us all the way to Benyao, not been able to cycle now it was our only choice.

He agreed, so after he ate his lunch and we drunk our tea we loaded mirko’s bike and left. The road was still in a very bad condition and the truck was bumping and jumping through the potholes making very slow progress. We were hoping that our things in the back of the truck would make it safely.

There was not so much space in the driver’s cabin, because we took a hitchhiker. So I was squeezed on the floor between tea pot, shoes and stinky, sweaty feet with no breeze from the window. It was very hot now, my whole body was covered in sweat and I was dying for some fresh air. I hoped the 40km till tarmac will pass fast, but they didn’t.

And I knew why I like so much to be on my bicycle.

We finally came to the cross where we unloaded the truck and said goodbye to a nice man. When we opened the back of the truck where our bikes were, we were shocked. The things were all over the place, the trailer was on the other side of the truck and there was lots of garbage all around so we were worried that something broke.

The kids by the side of the road told us that our 2 friends were not far from there. So they left and came back with Chris. We all moved our belongings to the small shade behind chaikhana, where we sat and think what to do next.

We were reunited with our cycling friends and stuck there with broken trailer, unable to move. It was very hot and we didn’t feel like going around looking for someone. So we just stayed in the shade drinking tea and discussing our days apart and how the desert was kind to us.

The lady who worked there asked us if we needed some help. We explained our situation so she made a few phone calls and half an hour later a friend of her husband came, took the broken part and left.

He returned an hour later with fixed arm, and didn’t want to charge us for his work. He was happy with a bracelet we gave him in exchange for his work. And we were happy to be able to move again. 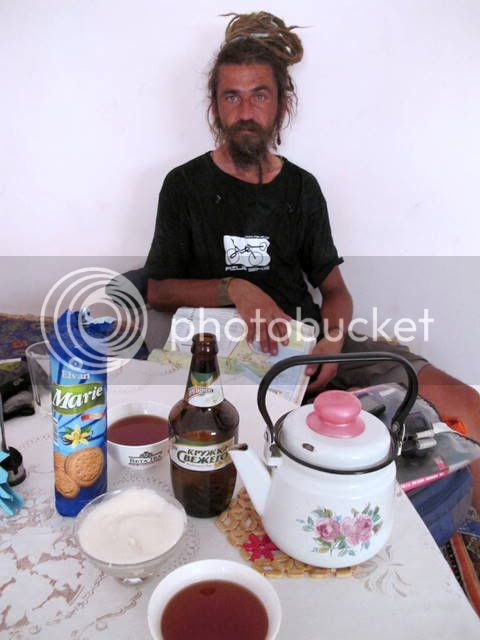 We spent most of the day in chaikana waiting for the heat to pass. Chris and Roy left around 5 pm and we wanted to follow an hour later.

Since Mirko was exhausted he was taking a nap in the small room while I was chatting with the lady who was working in chaihana. We were the only costumers she had at the moment, so she could relax and prepare for busy evening when all the truck drivers will come to have a dinner.

She told me she is from Qarakalpakistan, autonomic republic now belonging to Uzbekistan. She has been working in this chaihana for 7 years already with her youngest daughter(9 years old)who is helping her,because here she earns more money than in Uzbekistan and her salary is only 100$ per month.

She works everyday from 6am till midnight. Most of the income earns her husband who works in the construction business.

The weather changed. It was pretty windy outside, we were hoping to be lucky and have the tail winds.

It was time to go, so we paid for the tea and thanked her.
But when we opened the door the wind blew us back inside. The sky was orange and hazy, full of sand. There was a heavy sandstorm out here.

We were thinking about Roy and Chris if they were lucky enough to escape the storm or not.

FROM LEFT: Roy(israel), Me, the lady from chaikhana and her daughter, Mirko and the men who repair part on our broken trailer

After an hour or two the storm passed and we were able to move on, thinking what we should do next.

Our 1 month Uzbekistan visa already started few days ago and there was still many km we had to cover before we would reach Tashkent, where we would need some extra time to arrange all the necessary visas.

We realized we didn’t have much time left.

We were now considering taking the train. We met the lady who told us we could take the train from Benyao to Kongrat early in the morning. But we decided it would be probably cheaper if we buy the ticket at the first station in Uzbekistan 100km from here.

So we went back to the market to buy few more supplies and then crossed the railroad on our way out of the town.

Driving on a very broken “tarmac” full of potholes making very slow progress we hardly reached the outskirts of the town when the night fell.

We heard it should be a good road all the way till the border, 85km. There was no sign of it yet.

And the road was even worse than the broken dirt road through Kazakhstan.

In front of us we saw a property, the last building on our right side before the desert. We decided to ask them if we could camp on their land.
We were not in the desert yet and not out of town so we felt safer to sleep on someone’s land.

Nice people opened the door of the property and showed us inside.

They told us they saw 2 cyclists early that evening and we knew they saw Chris and Roy. The common Questions followed; where are you from and how long have you been on the way?

They knew we were tired, so they offered us some tea and let us to do our things.

We build the tent and prepared dinner (a nice soup) and than we checked the trailer. it was still not completely in order; it was leaning too much to one side causing the wheel to rub against the cart. after checking it out we were unable to remedy the situation.

But we found a lot of melted chocolate, so we had to put everything out of the trailer and clean the chocolate which was everywhere, such a waste. We also discovered that our veggie sausages were bad so we had to throw them away.

We were sorry we didn’t eat them in the mountains in Turkey, But took them all this way to the desert where is 57*C only to throw them away.

I was dead tired. And as soon as I lay down I was sleeping.